When Ambu decided to re-design their Ambu®Man resuscitation training manikin, it was Prevas they turned to for help.

Death from sudden cardiac arrest accounts for about 15% of all deaths in Western countries. With the worldwide increase in obesity and sedentary lifestyles, this figure is only likely to increase. A substantial amount of lives can be saved if more people are familiar with Cardio Pulmonary Resuscitation (CPR) techniques, and the use of high fidelity training manikins is key to achieving this.

For almost 80 years, Ambu, with over 2300 employees worldwide, has been dedicated to improving patient safety and saving lives through innovative technology in the areas of Anaesthesia, Patient Monitoring & Diagnostics, and Emergency Care.

The Ambu®Man training manikin, has over the years played a key part in training medical professionals, emergency services and the general public in the skills of resuscitation. As Fabian Sachs, Senior Corporate Product Manager at Ambu explains, the time had however come for a complete update, “we felt that with the current advances in mobile and sensor technology, along with changing medical guidelines, the time was right for the next generation of Ambu®Man”.

With a background as a street medic, nurse and a degree in medical engineering, Fabian has first-hand experience in knowing that technology can make a product more user friendly and save lives. “I know from my own past how important CPR-training is for the possibility to save lives in any environment. With the new Ambu®Man, we wanted a self-contained product that could be controlled from any available tablet, smartphone or computer, without the user having to install a dedicated app. It should also be robust, expandable and with exceptional battery life, enabling long duration training scenarios to be performed”.

It was Prevas with their expertise in embedded systems, that Ambu turned to for help. Ambu and Prevas’ engineers were quickly able to solidify the requirements and start prototyping solutions.

ADVANCED TECHNOLOGY TO THE RESCUE

“Fabian’s requirements really pushed the state-of the-art in what had previously been done with Single Page Web Apps for embedded systems”, says Christian Ward, Senior Product Manager at Prevas, “indeed, we believe this is the first time such a sophisticated, responsive and highly dynamic Web App has been used to control an embedded system. The power of modern web browsers allows us not only to offer a native app-like experience without downloading any dedicated software, but it also allows some of the data processing an embedded system would typically do, to be off-loaded to the user’s web browser”.

Aside from the revolutionary user interface, the manikin also contains a multitude of sensors and actuators to enable the trainee’s resuscitation technique to be accurately evaluated. The sensors not only measure chest compression depth and ventilated air volume, but also for example, if the trainees have performed the compressions with their hands placed on exactly the right spot. The ability to simulate a carotid pulse and breathing sounds, whilst generating ECG waveforms that respond to high voltage defibrillations, enable highly realistic training scenarios to be performed.

“Healthcare professionals, fire brigades and first aid trainers can setup realistic scenarios involving up to 6 manikins, allowing multiple casualty accidents to be simulated and practised”, says Fabian Sachs. “The instructor will be able to see the results from each of the trainees visualised in a single browser window and can instantly rate their technique, modifying the training session in real time. Without these manikins, it would have been impossible for the instructor to give this kind of feedback.  The pre-launch field trials showed that people really like the new approach we have taken to the digital technology”.

“We worked in a very close partnership with Prevas to ensure a high quality delivery on time. Together we set up realistic deadlines and had short communication paths, which allowed us to quickly solve any issues – the total development time was around 12 months, from our first discussions of the idea, to the commercial product announcement and market launch”, explains Fabian Sachs.

“Developing a product containing precision sensors, an embedded control system with the ability to absorb kilovolt defibrillation pulses, whilst being physically rugged enough to allow training scenarios in extreme environments is no easy task, so the ability of our two teams to sit down and combine their different engineering expertise, allowed us to tackle problems together and maintain schedules”, says Christian Ward.

“Together we have created a modular platform that not only brings resuscitation training right up to date, but also enables future enhancements via software updates – we are only scratching the surface of what soon will be possible”, says Fabian Sachs.

Ambu®Man has won the Swedish Embedded Award in the category ”Enterprise”.

The product utilises the very latest mobile technologies running Prevas Industrial Linux (PIL), to create a powerful platform for the Web App control and user interfaces. The Web App interface enables training sessions to be controlled from any modern browser, without the need to download and install a dedicated app. A user merely connects to the manikin, for example via the WiFi access point it can create, and points their browser to the manikin’s homepage. The Single Page Web App built using the Angular framework, is loaded and automatically optimises itself to the screen size and rotation of the user’s device, displaying sophisticated real-time graphs and graphics that are dynamically generated and rendered in the browser, to give a native app like experience. At the same time, other nearby manikins are “discovered”, allowing the instructor to start and monitor multiple training sessions from the same user interface. A custom battery pack with built in charging and fuel gauge circuits gives over 15 hours run time, enabling accident scenarios that start on the top of the mountain and end up in the operating theatre, to be simulated and practised. 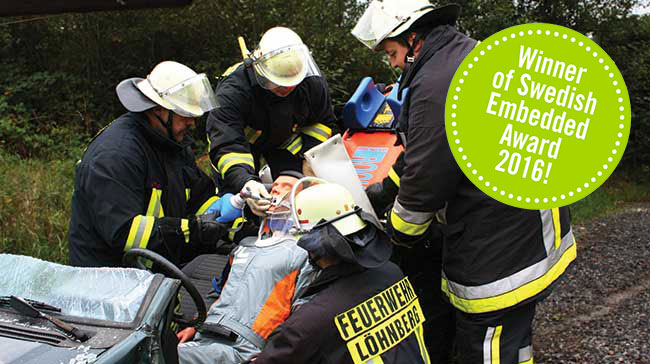 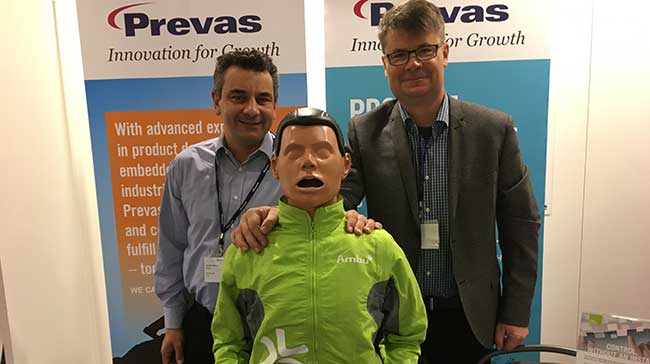 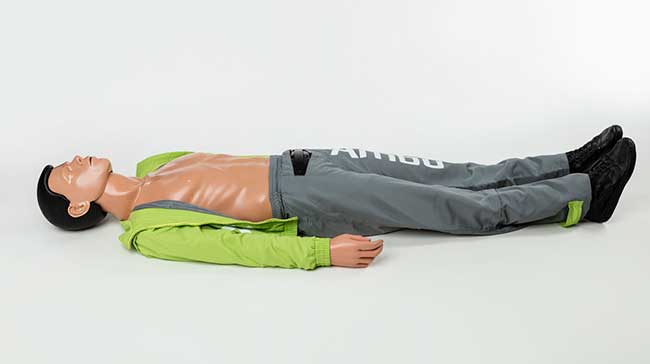