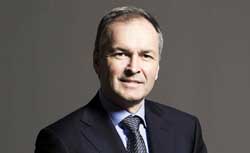 Karl-Gustav Ramström has been appointed as the new CEO for Prevas AB and will take up duties as CEO no later than 1 April 2013.

Karl-Gustav Ramström comes from SSAB where he is currently the Executive Vice President and Chief Technical Officer. Before that, he has had several senior management positions within the ABB Group. In March 2011, Karl-Gustav Ramström was elected to the Board of Prevas AB. With knowledge and experience from several international companies, he has been a very competent and accountable member of Prevas´ board. As CEO for Prevas AB, Karl-Gustav Ramström will take on new challenges.

“First, I would like to thank Mats Lundberg for his extensive and engaging work in developing Prevas. Mats Lundberg has been Prevas´ CEO from 2007 to 2011, and parts of 2012. Because of illness, he has, unfortunately, had to step aside and leave his role as CEO", says Göran Lundin, Chairman of the Board for Prevas AB.

“Prevas is well positioned for future challenges in a fast-changing world of technology. Our greatest strength is our very competent and skilled staff at all levels within Prevas. The Board of Directors is very glad that Ramström has accepted the CEO role and that he will take up the challenge to develop and specialize Prevas further in niched technology areas, with a strong focus on profitability", continues Göran Lundin.

"I´m looking forward to further developing Prevas´ business and believe that my background within advanced product development and industrial automation will help me to achieve this", says Karl-Gustav Ramström.

For more information and follow-up

About Prevas
With cutting edge expertise in embedded systems and industrial IT, Prevas contributes by providing innovative solutions that create growth. Prevas was founded in 1985, and the company is the main supplier and development partner to leading companies in industries such as life science, telecommunications, automotive, defense, energy and engineering. Offices are located in Sweden, Denmark, Norway and India. The company has just over 600 employees. Prevas has been listed on the NASDAQ OMX Nordic Exchange in Stockholm since 1998.