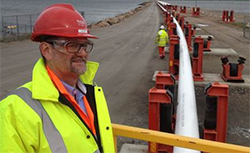 Prevas has signed a partnership agreement with Technip, a global supplier to the oil and gas industry, covering their operations in Scotland. The opportunity arose following the acquisition of Psiam that had had a close and longstanding working relationship with Technip in Norway.

Technip in Norway was already a user of Infor EAM (Enterprise Asset Management), one of the world’s leading maintenance systems. Infor EAM is a flexible maintenance system that is tailored to the stringent quality and functionality demands of the offshore industry. The Technip Group now wishes to use the Infor EAM solution beyond Norwegian territorial waters and has enlisted support from Prevas.

“We were given the opportunity to tender for a solution for Technip in Scotland and won the contract in the face of fierce competition from other suppliers. This is strategically important business for us with huge global potential as Technip has operations in 48 countries all round the world,” said Tord Svanqvist Head of the Center of Excellence within Enterprise Asset Management (EAM) at Prevas.

The project has only just started and a Scandinavian team of senior consultants from Norway, Sweden and Denmark from the Prevas Center of Excellence EAM are already in place in Scotland. Prevas has developed a number of Centers of Excellence to help its clients compete on the global market. At these Centers we can offer specialist project teams with specific domain expertise and technology platforms for profitable turnkey solutions.

“A good maintenance system and well structured consulting support in Norway opened the door for us in Scotland. We know the importance of understanding our clients’ operations and the challenges they face. The fact that we have gained the confidence of Technip in Scotland too, is confirmation of the good work we do and we envisage further big opportunities at Technip operations around the world,” added Svanqvist.

Technip has spoolbase facilities in Norway (Orkanger), Scotland (Evanton), USA (Alabama and Louisiana) and Angola (Dande). The Norwegian facility has produced over 850 km of pipe since it opened in 1995. The latest facility to be added, in Angola, has the capacity to produce 330 km of pipe a year and can produce pipe in lengths up to 1,500 meters. The dimensions and volumes in this sector are enormous, as are the challenges when laying pipe systems on the sea bed.